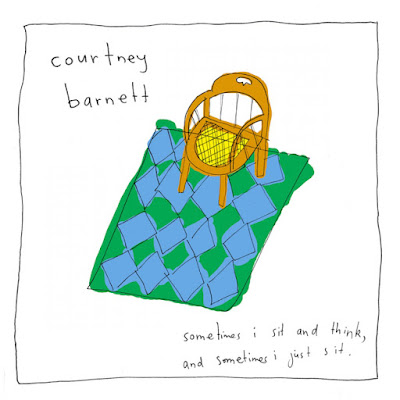 David F I love it! Some of this music reminds me of Sheryl Crow, but like if she grew up in West Heidelberg... How'd you time machine these anthems from my youth anyway? Favorite track: Kim's Caravan.

Ray in L.A. I can hear flavor a of Neil Young, John Fogerty & Kurt Cobain in nearly every song! Favorite track: Pedestrian At Best.


A young man adrift ditches work mid-commute... a swimmer passes out trying to impress the person in the next lane... a couple goes house-hunting and ends up peering into the life of a widow: These are just a few of the ordinary-extraordinary moments captured on Courtney Barnett's Sometimes I Sit and Think, and Sometimes I Just Sit. And like all moments, they pass, sometimes with event but usually without. Not that event seems to matter either way to Barnett, who shows up in her own songs like a bemused local taking questions from a camera crew that rushed to the scene in hopes of finding someone more interesting. "I had goggles on," she notes in the swimmer song ("Aqua Profunda!"). "They were getting foggy/ I much prefer swimming to jogging." PF