I recorded the skyline as hurricane Sandy ploughed across the CA/US boarder.
No comments: 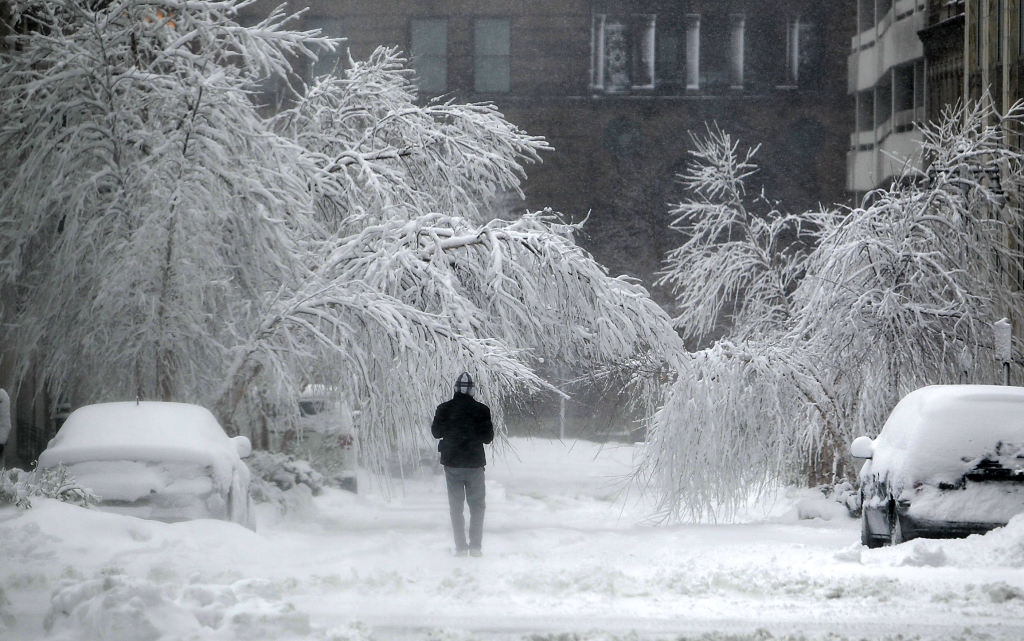 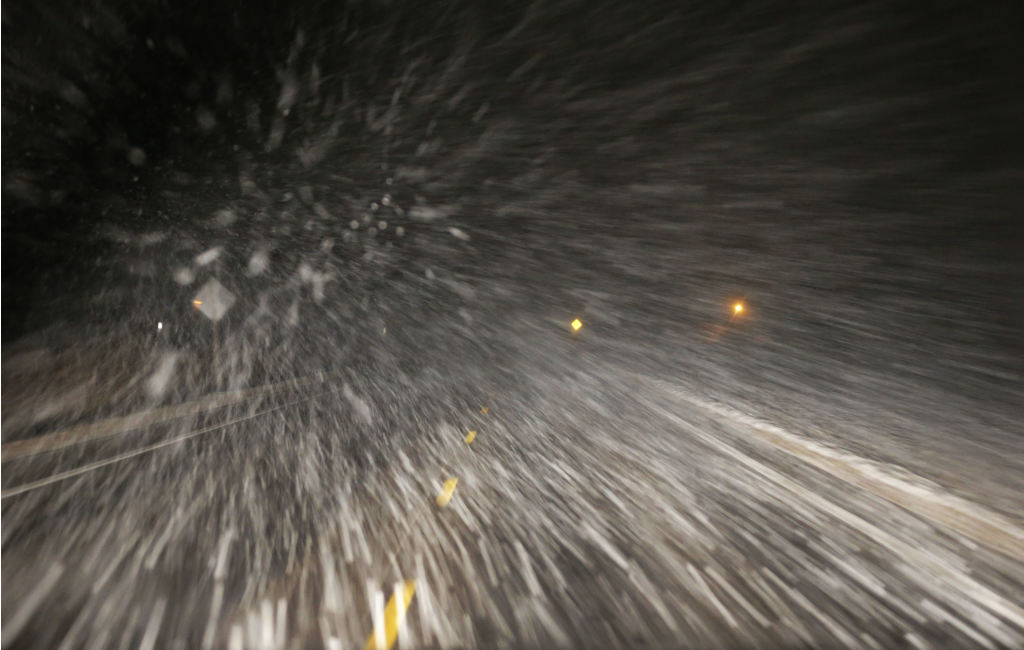 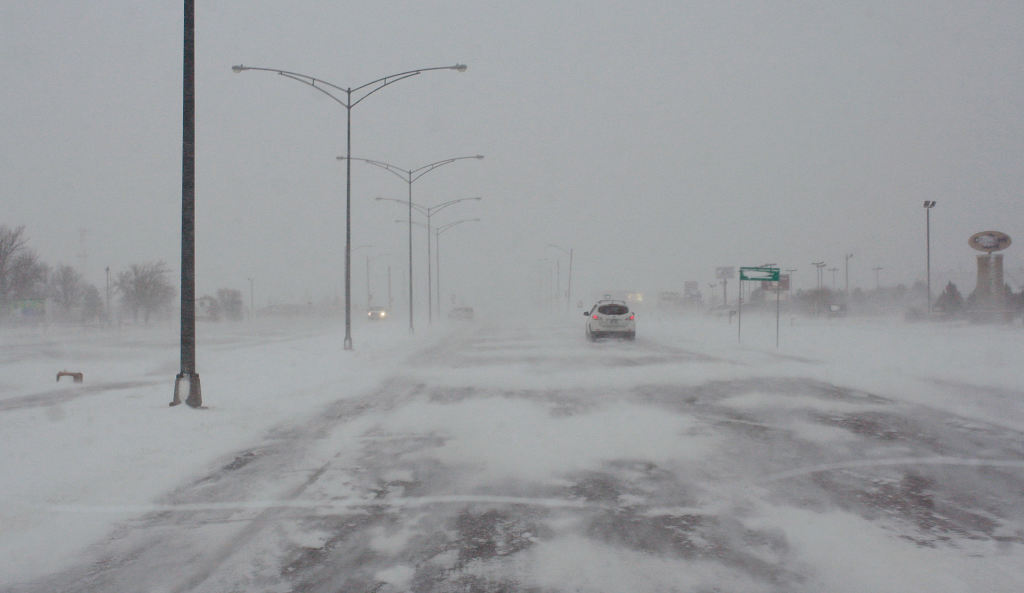 What the hell is going on this winter???
No comments: 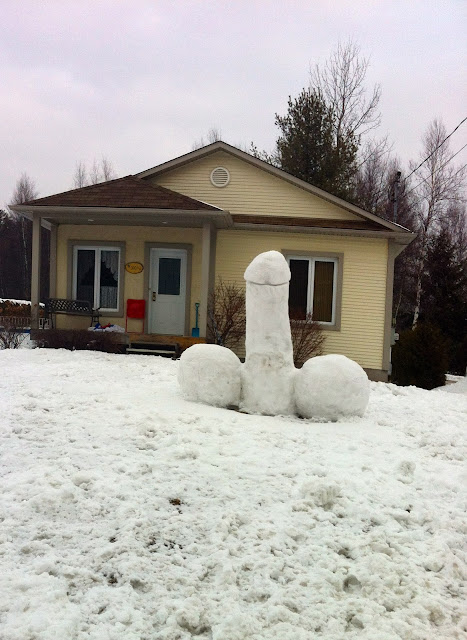 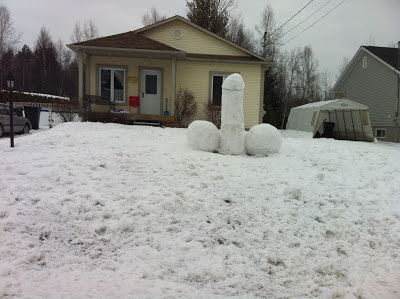 Recent mild temperatures has made the snow perfect for making snowmen.
No comments:

I am very excited to release Bloodroot on Earthwork Music!
I am forever grateful to the album's co-creators, who lent their ears, lungs, throats, hands & ideas to make up this body of work.
Many dear people listened to these songs performed at shows; their presence and encouragement made the songs real.
I wrote and recorded Bloodroot while grieving the death of my soulfriend Andrew Wolf. Through making and performing this record, I have felt his love come alive again again.

Wonderfully great pop music... Excellent songwriting and melodies carry this album from start to finish. Her voice is infectious.
2 comments:

Why go and see Steve Albini in 2012? Hypothesis number one: to get the "nouveau riche" thrill by being produced by the man behind Nirvana, the Pixies and PJ Harvey - wrong answer. Hypothesis number two: to play online poker and discuss cooking recipes with the kindest nerd of history - you're still missing the point, although.... Hypothesis number three: because when you want to record a real album, all recorded live and played tight, the legendary Electrical studio in Chicago is still the best place you can find on this side of the universe.

Off the map, H-Burns’ fourth album, is an album labeled, engineered, mixed and mastered by Steve Albini. And it’s pretty obvious: fourteen tight songs, full-on (faithful to the motto hammered by Albini: “feature it, or fuck it"), carved in eight days, by five people (drums, guitars, keyboards, bass), without ever leaving the studio. After the critical success of “We go way back” and the recent collaboration with Chris Bailey of the legendary Australian band The Saints (Album Bailey / Burns), H-Burns continues on Off The Map to move towards a sound which is less and less harsh, but instead wider and wider. H-Burns dropped the plaid shirts, now they truly have become a great classy rock band, a band that doesn’t know any borders. Off the Map is a world-record where the concepts of maps and territories are the cement of the lyrics, in a total symbiosis with the sound: brass performed by the musicians from Wilco’s latest albums, a drummer who hits a snare drum from the 1930’s, keyboard parts played on vintage instruments that sound like they haven’t been touched for years. This new album of H-burns is also the first album released by the label Vietnam, tailor-made by their friends at So Foot, the magazine that has once been described by Voxpop as ” a punk football magazine which talks about football because it’s the rock’n'roll of the modern world “. Create a label. What for? ” Because what really matters, it’s the journey “. With or without a map.

Great album... Brings you back to the days of old! Recommended ***
1 comment: 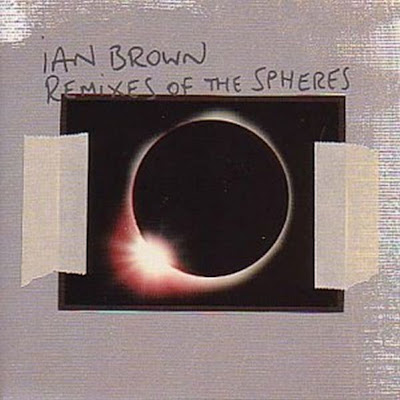 He's not exactly a beauty but a fuckin' brilliant musician.
I love THE STONE ROSES but I admire IAN BROWN for what he was doing after the Roses. 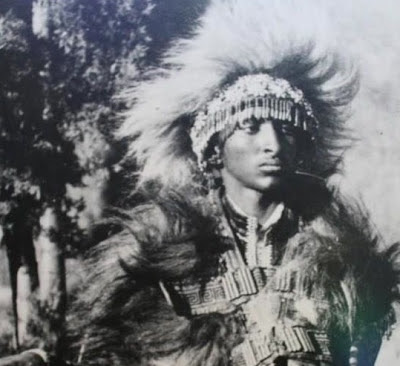 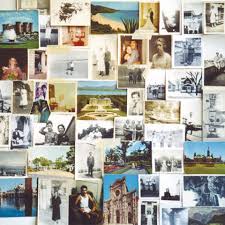 Tracks
1. Not With Haste
2. Little Birdie
3. Angel Band
4. Not In Nottingham
5. Reincarnation
6. I Was Young When I Left Home
7. Partner Nobody Chose
8. Atlantic City
2 comments:

I recorded this man doing what he has done for 57 years... Just incredible.
Check them out
Bobalu Cigar Co.
No comments: 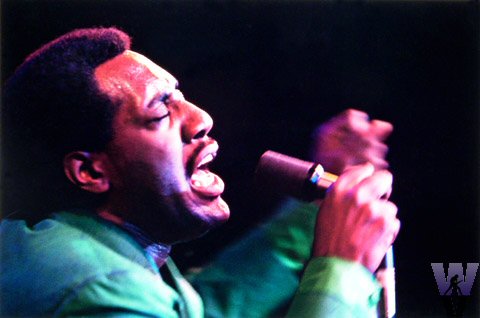 His achievements as a singer may cast a giant shadow over everything else he achieved. Anyone with a passing interest in music should be able to tell you that Otis Redding wrote 'Respect' and 'Dock Of The Bay' - that's a given. But the vast majority of his many other singles had an Otis composition or co-write on at least one side, while almost all of the albums released during his lifetime featured additional Otis Redding copyrights. A prolific tunesmith and savvy A&R man, Otis also found time to write songs specifically for Arthur Conley and others whose careers he hoped to boost.Otis wrote a staggering number of quality songs in a very short period of time. In fact the more Otis wrote, the more he wanted to write: in the few weeks leading up to his death, he went into Stax's McLemore Avenue studio and cut around 30 new songs, leaving behind enough material for a trio of posthumously released albums which, for many fans, are better than many of those that came out while he was still alive.There's no way of telling how Otis would have progressed as a songwriter had his plane not crashed in December 1967, but the unreleased songs he left behind give a pretty good indication that he was moving in interesting and special directions. The quality of many of those posthumously issued compositions was quickly recognised by his peers. Fine versions of several of them, by Buddy Miles, Etta James, Patti Drew, Percy Sledge and others, appear in "Hard To Handle", the latest volume in Ace's occasional "Black America Sings" series. Tony Rounce
1 comment:

The fourth album from Gainesville, FL outfit Holopaw takes the perspective of a preparatory school boy, unsure of himself, passing through a beclouded world as best he can. He’s not the bad kid or the popular kid, the funny kid or the poor one. He’s the introverted kid, aware of his surroundings, his head racing with confused thoughts and starry observations. Singer John Orth’s  gentle vibrato is well positioned to channel the nervous, ephemeral innocence of boyhood curiosity. Beyond him, the instrumentation builds with percussive jolts that create a terrain both explosive and calm, like watching fireworks in the snow.

For artists such as Bonnie 'Prince' Billy and Dawn McCarthy, who are mostly associated with alt-folk and indie-rock, a full album homage to the Everly Brothers initially comes as a surprise. The Everly Brothers sold millions of records with pop songs such as 'All I Have To Do Is Dream' and 'Wake up Little Susie' but they had their chart-topping thunder stolen by the Beatles and retreated back into their first love, country music, to great acclaim. The 13 tunes included on What the Brothers Sang come from that later period, and 'So Sad' and 'Devoted to You' were the only chart singles... 405

Perfection lies within this handsome repackaging of the debut album from the House of Love. Before their career faltered exactly at the point it should have been taking off, the House of Love seemed set to be the defining British guitar band of the late 80s. The measure of their brilliance – not too strong a word – is they could slip out Shine On and 1988 John Peel Festive 50 winner Destroy the Heart as single-only releases without compromising the quality of the album at all. Thankfully, this set offers all their unimprovable recordings for Creation Records, plus the usual unnecessary rarities. Here was a band who knew just how good they were – Guy Chadwick's songwriting could border on florid, but the grandeur of the performances suits it to a tee. If you don't already own The House of Love, buy it.

"Considered by many to be the fledgling band's finest work, it has been hansomely expanded into a three-CD deluxe edition..." - Alan Jones, Music Week, November 2012

"...still sound like a band engaging into top gear and riding the crest of a wave." - Andy Peart, Vive Le Rock, Jan/Feb 2013 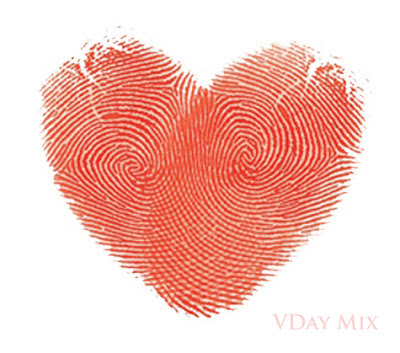 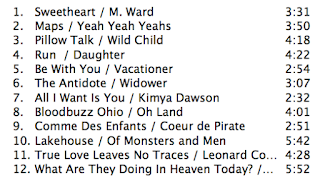 I really like this new duo and the songs they have written!
HoMe
No comments:

This is a great site full of live sessions from the back of a cab...
Black Cab Sessions 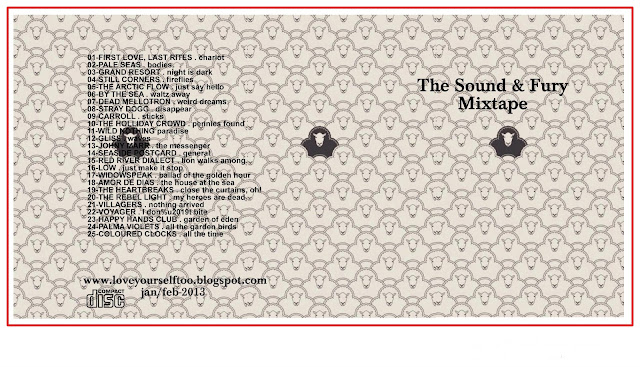 The Sound & The Fury Compilation
I really like this blog and the mixes that are made by the author... Thought I will give you a teaser on a recent mix... Merci Marco!
No comments: 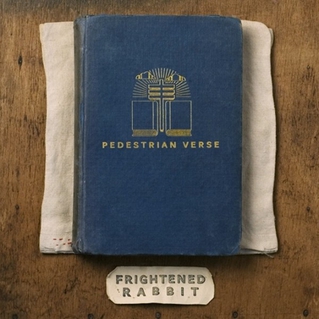 Frightened Rabbit's fourth studio album is a tapestry of carefully crafted verse and gracefully epic instrumentation, stitched with the shortcoming of humankind and laced with the vulnerabilities of love. The well-established Scottish band has undergone a few changes for Pedestrian Verse: their overall sound is a step up from their first three albums thanks to producer Leo Abrahams (David Byrne, Brian Eno), and their songwriting has taken on a new maturity and focus thanks to their freshly collaborative approach. Lead vocalist Scott Hutchison has previously taken on the songwriting responsibilities, penning break-up gems and cynical anthems that we've loved for nearly a decade, but chose to write the material for the new record with the rest of the band. The result is stunning: instead of a tentative confessional collage, each song comes off as a piercing novella, be it about homelessness, addiction, or songwriting itself. babel

* The new record “Songs for Mary” will see its official release in spring!
* An original song, called “The Woods”, is featured in the “Senses” episode of the new BBC show “The Wonders of Life” with our man Brian Cox.
* Also: “God Answers Back” from the “End of Love” album will be used in the new Diablo Cody movie (end credits yo!).
* Keep an ear out for Eef on NPR’s All Things Considered.
* But most exciting is the launching of a subscription service called “Eldorado”

Since forming in the early '90s, Clem Snide has undergone numerous lineup changes, moved to three different cities and left record labels big and small in its wake. Even though singer-songwriter Eef Barzelay has long been the band's only constant, Clem Snide still managed to break up after recording a long-unreleased 2006 album. Now, after two terrific solo records, Barzelay has re-formed Clem Snide — and marked the occasion by finally unveiling Hungry Bird, an inventive prog-pop curveball with a post-apocalyptic storyline and many moments of dazzling beauty.

Made for TV Movie Live

God that was strange to see you again
Introduced by a friend of a friend
Smiled and said 'yes I think we've met before'
In that instant it started to pour,
Captured a taxi despite all the rain
We drove in silence across Pont Champlain
And all of the time you thought I was sad
I was trying to remember your name...

It's nothing but time and a face that you lose
I chose to feel it and you couldn't choose
I'll write you a postcard
I'll send you the news
From a house down the road from real love...

I'm not sorry there's nothing to save...
No comments: 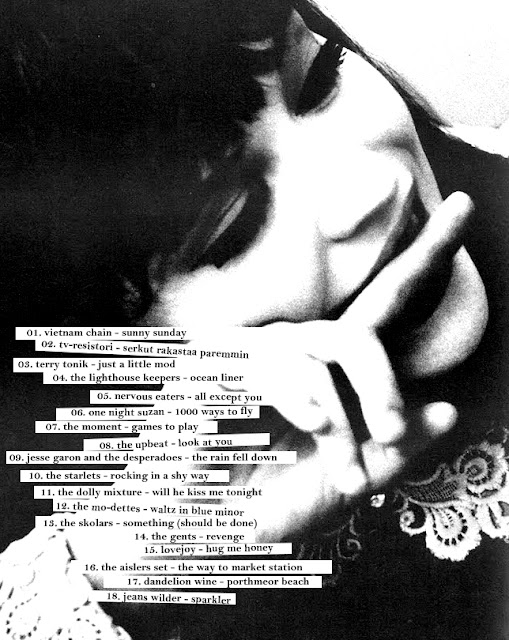 The Boys Who Couldn't Stop Dreaming
Enjoy
No comments: 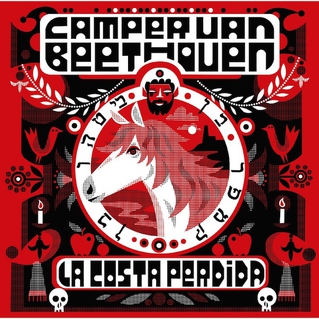 Even if La Costa Perdida isn't a great Camper Van Beethoven record, it does illustrate how unique this band still is, 30 years after it formed. And it truly is a kick to hear CVB ply its craft with road-tested assurance and subtly virtuosic musicianship. The bluesy vamp "You Got to Roll" doesn't totally work on record, but it should sound great in a concert setting, where the proggy accents of "Summer Days" and the "Euro-Trash Girl"-like epic "Northern California Girls" will also likely catch fire. In lieu of having great material, at least Camper Van Beethoven can count on being itself better than anybody else. pf

Having multiplied into a six-piece collective brotherhood, Radar Brothers spent the past few years collaborating, meshing their writing styles and recording an album that seamlessly welds together various worlds. The band will release Eight on January 29, 2013. Eight (being their eighth record) may well be Radar Brothers' darkest, hardest rocking, most psychedelic, and yet most intensely personal album to date. Jim Putnam’s knack for melody and surreal lyricisms are well intact, only darker and more personal at times, hilarious at others, poetically inspired at others.

Two golden oldies from two of my favourite bands
1 comment: