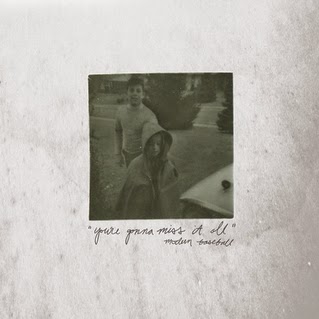 Like pretty much every guitar band these days that doesn’t immediately scan as “indie rock,” Modern Baseball have been lumped into “emo”—and yes, considering Modern Baseball are probably Weezer fans and are caught up in girl problems of their own making, that label sticks to an extent. Thing is, the actual music of You’re Gonna Miss It All is just about everything but emo, mostly some code-splitting of the pop-punk double helix. There’s shout-and-whoa power-pop (“Charlie Black”), prim twee (“Going to Bed Now”), folky punk (“Your Graduation”), all built around sturdy choruses. One thing Modern Baseball do have in common with their trendpiece peers is that they’re getting attention because they’re much, much better at making music than they were two years ago. This is evident in the songwriting, which is more confident and ambitious, but just as importantly, the production. You're Gonna Miss It All was mastered by Will Yip (basically the Steve Albini of this scene) and engineered by Jonathan Low, a guy who’s worked on the National’s records. So needless to say, it’s going to sound a lot more professional than Sports, a charmingly amateur affair that seemed content to be passed around amongst Modern Baseball’s Facebook friends. PF

Trying hard not to look like I'm trying that hard
Failing miserably at everything, including that
Making plans in my head right before I go to sleep
Trying to think of who could make a better me than me
Maybe I'll shoot him an email
Maybe he'll give it a go
Then I'll be free to just evaporate, disperse, or implode
Picking at holes in my jeans
There's so much God in my gene pool
Not feeling lonely, I just like being alone

I've called A through F already but no one knows
Why one girl, one band, two paychecks are more than I can handle
Mathematically that can't be more than one end of a candle
Bottom of the ninth, can't find my socks

Lord knows
I'm stuck between two good things, but I just wanna get out
Mom knows
I should have been home an hour ago
But I'm still outside, not doing anything wrong
Just walking in circles, replaying high school songs in my head
Because it's better than lying awake