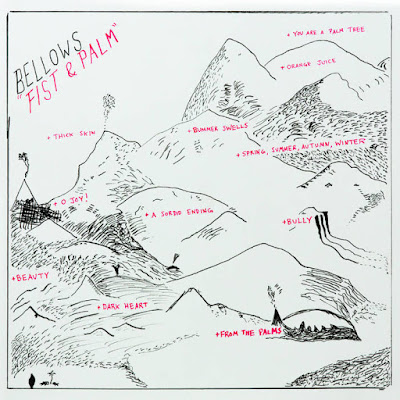 "Fist & Palm" was written and recorded by Oliver Kalb over the course of two writing periods. The first was a month-long song-a-day project in October 2014, from which 7 of the 31 songs written for the project were kept for the final album, and a certain sonic template was mapped out for how the record would develop the sound of Bellows as a recording project. After a heavy year of touring throughout 2015, the album was completed between October 2015 and January 2016, in a several month long fit of anxiety. James Wilcox (JCW) produced, sequenced and sampled drums on several songs, Felix Walworth (Told Slant) recorded live drums throughout the record, Gabrielle Smith (Eskimeaux) contributed violin and choral arrangements, and Jack Greenleaf (Sharpless) mixed the record and added final arrangements.