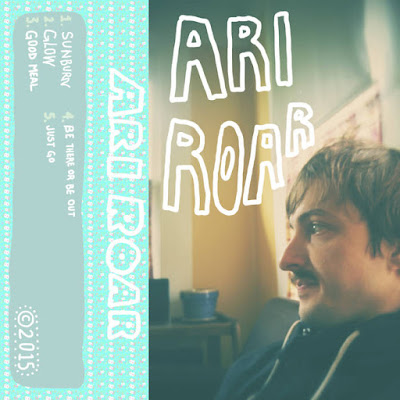 There’s an air of wistful retreat coursing right through the heart of Ari Roar’s new self-titled EP that perhaps lends it to graceful summer reclines rather than gloomy october days, however such is the strength of the songwriting that went in to its creation, it still manages to feel not only like a compelling addition to the latter stages of 2015, but a completely vital one.

Though the building blocks share a similarity with much of what we tend to unearth via Bandcamp (sunken vocals, hazy melancholy, DIY/bedroom recording dustiness), there’s a brittleness to Ari Roar’s songs that tend to deny their skeletal posturing, lending a warmth and captivating sense of mystery to the magic that is housed deep within them. And let be said that much of this new tape is indeed somewhat magical. Opener ‘Sunburn‘ is a slightly ambiguous starter-point but ‘Glow‘ is a sumptuous pop song, all smart melodies and, well, glowing sentiments that positively shine out of the speakers and in to your day. GFP