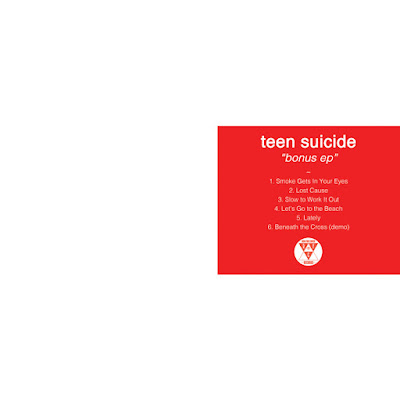 Teen Suicide’s latest 'Bonus EP' is a concise collection of songs which were only previously available via Dropbox links from the band’s Facebook page. Salvaged from the internet abyss between thinkpieces on Marilyn Manson’s ribcage and pictures of Omar from The Wire, Bonus EP’s six tracks are as genre-defying as their latest twenty six track swansong LP It’s the Big Joyous Celebration, Let’s Stir the Honeypot - pulsating, glitchy arrangements like opener “Smoke Gets In Your Eyes” and the autotune-heavy “Slow to Work it Out” are as captivating as the psych-pop-influenced “Lately” and “Lost Cause” are catchy. Though it exists as a compilation of almost-lost tracks - the EP’s refusal to be tied down to a single defining genre or mood for more than a few moments is as accurate a portrayal of Teen Suicide’s impetus as a band as we’re ever likely to get.