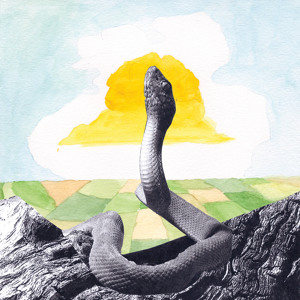 Woods offer up their best late-1960s West Coast vibes in the
new Adarsha Benjamin-directed video for "Cali in a Cup".

"For their seventh album, Bend Beyond, Woods got dark. It’s not that they weren’t dark before—when you really get in there and listen, Jeremy Earl is singing about some heavy stuff, but it’s hidden under his gorgeous falsetto and sometimes obtuse lyrics. On Bend Beyond, though, Earl and company fully embrace that darkness. Album opener “Bend Beyond,” has long been a jammy live staple, but here it’s compact and tight with a stuttered guitar line and a world-ending collision of instruments. Meanwhile “Is It Honest” jangles along happily until you notice Earl is in a more destructive zone than the bright music initially suggests, singing It’s so fucking hard to see as both a form of comfort and an act of despair. Instrumentally, Bend Beyond is certainly the most full Woods record yet, guitars weave and bubble across peppy drumming, but lyrically Earl is at his most direct and spare. While previous albums sounded like they went directly from Earl’s brain to tape with minimal outside interference, Bend Beyond is lush and full-bodied, the work of a band in perfect, heavy harmony. Listening to the record as a whole, it feels like the most daring leap Woods has made yet: It captures the band’s live intensity, but keeps the intimate sadness that made them so great in the first place."- Sam Hockley-Smith