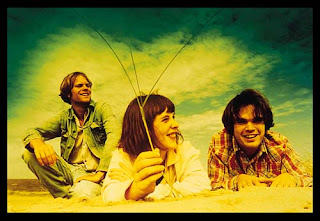 Genre: Shoegaze / Indie Folk-Pop
Home / MySpace / mY BEST
Mojave 3 are a British band, consisting of Neil Halstead, Rachel Goswell, Simon Rowe, Alan Forrester, and Ian McCutcheon. Goswell, Halstead and McCutcheon previously played in Thames Valley shoegazing band Slowdive.
The band initially existed as a trio, consisting of Halstead, Goswell, and McCutcheon. After Slowdive were dropped by Creation Records, the trio decided to change musical direction to a dream pop/country rock/folk music style, and were signed by 4AD Records. They took on the new name "Mojave," following a suggestion by Wendy Fonarow, but upon the discovery of another band already using the name, the "3" was added (in reference to the group's three members). Rowe (formerly of Chapterhouse) and Forrester joined shortly after the release of their first album.
Both Halstead and Goswell have released solo albums, also for 4AD.
Despite still being listed as "on hiatus", the band returned to playing live in 2011, including gigs supporting Band of Horses.